Our CEO Sharon Williams recently wrote this article about the importance of social media to your business. Click here to read my full article on the Kochie’s Business Builders website, or read below. 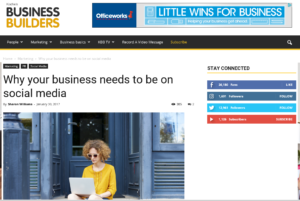 Before you think it’s not relevant or too challenging, take a step back and consider just how drastically our personal lives have changed since the introduction of the internet. I shopped for my son’s Christmas present in December and noted blog comment on the gift options for my mother.

The same can be said for choices we are making in our professional lives. The tools that have changed communication and organisation in our personal lives can and should be applied to our business world.

In October 2010, 56% of small to medium businesses were not using social media at all and a quarter of these had no short term plans to start. In fact, they saw no reason to put investment into the area. Research conducted by the Council of Small Business of Australia in 2010 showed that two thirds of small businesses were still unsure of the exact benefits of a social media strategy and were unsure of why they should adopt one.

Social media is a fast, smart way to communicate. So take stock, ask around and start reaping the benefits of what I believe promises to be the most cost-effective communication tool we’ve had in 25 years.

As a business, customers are our core and we are constantly striving to increase this base. Extraordinarily, this country is leading the way with social media use. Australians spend more time on social media websites than any other nation, so have confidence that this is one trend you don’t want to miss out on.

As an example, the franchise Crust Pizza has taken full advantage of how social media can reform the way a business engages with customers. People were asked to tweet ‘Crust Free Pizza Friday’ to enter a draw for five free pizzas worth up to $100.

Initially the campaign was meant to run for a few weeks, but due to its success it has become a weekly event. Crust Pizza chief executive Michael Logo says that the benefit of such a campaign is that it delivers an ongoing benefit by continually enticing new customers.

“The power of word of mouth shouldn’t be ignored for such a small cost.”

For B2B businesses, the most common and main use of social media is to develop thought leadership and improve customer service. Because of that, platforms such as LinkedIn and blogging are most often the tool of choice. Educating people with industry knowledge and creating connections generates leads and can increase sales.

So what is holding businesses back to reap their full social media potential?

Fear
For many generations, running a business in this, technologically driven world can be intimidating. But that’s part of the joy. As business owners, one of the things I enjoy is treading outside my comfort zone. Speak to those using social media well to ease your way into a steady, consistent and conservative presence to start with.

To simply ignore the influence social media can have on our businesses is tantamount to isolating a large number of potential customers, especially the younger ones. That said, the fastest growing users of social media sites are the middle aged.

Lack of experience
Unlike the members of Gen Y and below, these technological advancements have not been an ingrained part of life. My nine-year-old son will never know a non-digital world. It’s only natural that lack of experience in using social media can slow the process.

Lack of experience however is not an excuse one can fall back on. Social media is fast becoming the most prominent, effective and cost-effective marketing method for the modern business. Find experts you can trust to help you.

Waiting for ROI
Many social networking sites such as Facebook and Twitter are free and require no monetary investment from you. Where you will need to invest is in staff or in your own training. When using social networking to leverage your business, it’s crucial to have someone on board who knows their stuff.

Social media platforms are not necessarily going to provide instant gratification or return – so be patient. It will take time to develop a following. However, the advantage is that for a minimum ROI a business can receive maximum exposure. Search ‘Old Spices Responses Case Study’ in YouTube for an amazing example.

Unwilling to be transparent
Social media platforms have exposed a myriad of opportunities for businesses to take advantage of. The most prominent is that they have given a voice to the once mute consumer. By clever use of social media platforms customers can be connected with your brand like never before.

Given that 2010 was a breakout year for brands using Twitter and Facebook, now is the time to think about it as the year to create that social media engagement presence. Start steady and start small.

The higher the effort the bigger the eventual return, but the opportunities, leads and engagement social media can provide business today can surpass any other form of marketing tool I have worked with – and it’s fun. After all, don’t you want your man to smell like ‘the man your man could smell like?’ with Old Spice?