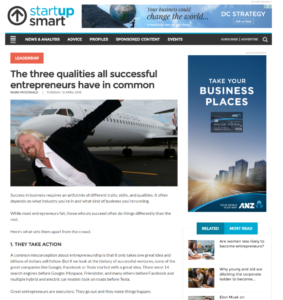 Success in business requires an artful mix of different traits, skills, and qualities. It often depends on what industry you’re in and what kind of business you’re running.

While most entrepreneurs fail, those who do succeed often do things differently than the rest.

Here’s what sets them apart from the crowd.

A common misconception about entrepreneurship is that it only takes one great idea and billions of dollars will follow. But if we look at the history of successful ventures, none of the great companies like Google, Facebook or Tesla started with a great idea. There were 14 search engines before Google; Myspace, Friendster, and many others before Facebook and multiple hybrid and electric car models took on roads before Tesla.

Great entrepreneurs are executors. They go out and they make things happen.

They chase the best talent, source big deals and sign key customers. The guy who invented MS-Dos was sitting in his garage. Bill Gates went over to IBM and asked them for business. He then went over to that guy and purchased the operating system from him.

The best talent follows a leader. The difference between a leader and a boss is that the leader gets his or her hands dirty. Failure is the default if you don’t take action.

2. THEY FOCUS ON WHAT MATTERS

In a startup there’s an endless amount of work you can do. As an entrepreneur, you probably have a lot of different business ideas, and the more you interact with the market, the more opportunities you come across.

Starting a company is often a race against time. There’s limited time and a limited amount of money, and you have to break even before you run out of it. To make it happen, an entrepreneur needs to focus on what matters and that involves saying ‘no’ to most things, while saying ‘yes’ to a select few.

Then they can multiply their output and move faster than anyone else.

3. THEY ARE HIGHLY ADAPTABLE

Business success is not a straight line. Top entrepreneurs didn’t come up with a ‘business plan’ in which they had it all figured out, making millions of dollars pour in naturally.

Most businesses, in fact, started as a completely different idea. The end result was just the entrepreneur adapting to market reality.

Instagram started as a Foursquare knock-off; Slack was an online gaming software; Groupon was a fundraising site; Starbucks sold espresso makers; Nokia was a paper company and the list goes on.

When Apple was about to go bankrupt, Steve Jobs recognised a market opportunity, killed numerous notebook and desktop lines and made an iPod instead. When Bill Gates met with IBM, he promised them an operating system he didn’t have. Shortly after the meeting, Microsoft entered the OS business.

It’s not the strongest or the most intelligent that survive but ones who are willing to embrace change.