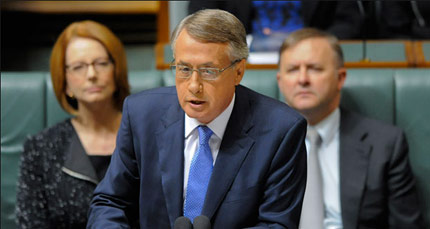 The Budget this week was an “Alice in Wonderland” affair, from a shrinking cast to confusion in the main plot. It looked like a last ditch attempt by the Gillard government to save face with a conservative set of proposed plans. This is almost certainly Swan’s final budget and he again announced a projected ($19.4 billion) against his own forecast of a $1.5 billion surplus. Is it any wonder voters have stopped listening?

Labor’s forecasts again failed to add up and Swan appears to have had recurring temporary amnesia from forecasts he announced a year ago. His “Swansong” budget setting seems to have been played around childhood games with themes around roll the dice and guessing the number of lollies in the jar. The size of the ever increasing deficit moved from Swan’s estimate a few weeks ago of $7billion, to Gillard’s guess of $12 billion to Wong’s $17 billion in the last 14 days.

Australia has given up listening on a government lacking in trust and soon to be in opposition. It is a Budget that can’t be taken seriously because the management team will likely change within a few months and those initiatives possibly never seen through.

I used the Budget announcement on Tuesday night to explain basic accounting to my two teenagers, about the fact that numbers needed to be trusted and management of a country was like the management of a household or a business, just much larger and with international aspects to consider. Even my 12-year-old son worked out very quickly that the figures didn’t look too good for Australia.

If management is about trust – whether it be a country, business or home – the Budget was a reminder that the governments switching and weaving has created significant instability and sceptism. This has had a big impact on business confidence.

With the government placing business and many overseas investment decisions in a “rabbit in the spotlight” economic uncertainty by calling an election so far in advance, decisions in the business world are being put on hold until political stability returns. Meanwhile, jobs are at risk while business circles in a holding pattern. As the country has deepened into debt the surplus years of the Howard/Costello years seem a long way behind us.

Figures and managers need to be trusted and business needs support to prosper. Here’s to a management system and a government we can trust.