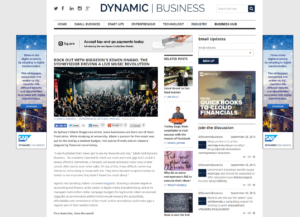 As Sydney’s Edwin Onggo can attest, some businesses are born out of sheer frustration. While studying at university, Edwin’s passion for live music was put to the test by a student budget, risk-averse friends and an industry plagued by financial uncertainty.

“I was frustrated that I never got to see my favourite acts live,” Edwin told Dynamic Business. “As a student, I wanted to check out more and more gigs but I couldn’t always afford it. Sometimes, a fantastic act would announce a tour only to later cancel, often due to poor ticket sales. On top of this, it was difficult convincing friends to come along to shows with me. They were reluctant to spend money on tickets to see musicians they hadn’t heard too much about.”

Against this backdrop, Edwin conceived GiggedIn. Boasting a double degree in accounting and finance, and a career in digital media and advertising, where he managed multi-million dollar campaign budgets for big brands, Edwin envisioned GiggedIn as an innovative platform that would increase the accessibility, affordability and convenience of live music so that Australians could make gigs a regular part of their weekly routine.

First Australia, then the world

With assistance from startup accelerator BlueChilli, GiggedIn was founded in early 2013 as a crowdfunding platform – think ‘Kickstarter’ for live music. The aim, Edwin explained, was to “de-risk shows and help more artists perform in a room with a guaranteed, packed-out crowd”.

GiggedIn later evolved into a crowdsourced ticketing platform and in November 2015, the business launched a membership service, now its main offering. For just $35 a month, members can attend up to 20 shows each week – with no risk of cancellation.

While the startup typically targets events at venues with 2,500 capacity or lower, it has also partnered with acts that play in larger venues such as Sydney’s Hordern Pavilion (popular alternative rock outfit The Rubens play there in two weeks). Critically, members have access to exclusive and mass-market shows in Sydney and Melbourne headlined by local and international artists across a range of genres including indie rock, pop, electronic, hip hop, soul and more.

GiggedIn has been a big hit, particularly with music fans aged 18 to 30 who, according to Edwin, “value experiences over things”. As a result of this popularity, and support from industry and investors, the startup has, to date, raised more than $500,000 in capital.

“Our most recent funding round closed in less than three weeks because of how strong our trajectory has been,” Edwin said. “We recently expanded beyond Sydney, launching in Melbourne, and we are looking to move into the other capital cities by the end of the year, before going global in 2017.”

An eclectic bunch of staffers

One of the first challenges Edwin faced was assembling a reliable, A-Grade team that would excel in a fast-paced environment where there are new challenges each day.

“Resisting the urge to hire people similar to myself has been a massive learning experience,” he said. “Employers often fall into the trap of hiring in their own image and building a core team of like-minded people who they get along with. Sure, this might produce a great culture but it can also mean similar strengths and weaknesses are brought to the table.

“I have pushed myself to hire an eclectic bunch of individuals with different strengths and weaknesses. This has made for a balanced team whose value is greater than the sum of its parts and which has allowed the business to develop and grow at the rate it has.”

Perhaps the biggest challenge for Edwin has been promoting exciting events that are happening in members’ own neighbourhoods but are at risk of going undiscovered.

“To address this, our team carefully curates quality shows that we know our members will love and we present it in way that’s easy to see on our web and mobile platform,” Edwin said. “We strive to make accessing and attending shows simple and easy. We also make it a priority to keep in touch with our members to ensure we keep close to their wants and needs and evolve around them. As a result, members trust that when they check out a show featured on GiggedIn, it’s going to be a great act and a great time.

“There’s a great culture in Australia when it comes to live music – we love attending shows and festivals. At GiggedIn, we’re driving a revolution in the industry by introducing live music to millions of Aussies who wouldn’t normally go to shows. The most rewarding part, for me, has been seeing people having a killer time at shows and knowing that we played a part in making that happen. I’ve also enjoyed supporting the industry, particularly talented local acts, and the feeling of making history every day!”