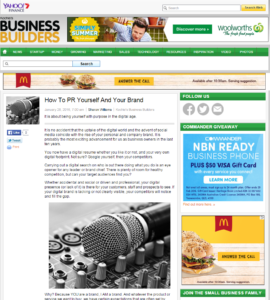 As the Australian government shines more light on start-up companies, it’s now considered to be a fine time for anybody who is thinking of taking the plunge into the entrepreneurial pool to finally make a move. Yet coming up with a fabulous business idea is one thing – knowing how and where to start is another.

Many people think the first step is to get outside investment. But the creators of multi-million dollar venture Appster have shown that investment is not the be-all and end-all.

Appster co-founders, Mark McDonald and Josiah Humphrey started Appster at the age of 19 and, over the last 4 years, have aggressively grown to a staff of 275 across three continents. The company is on track to post almost $100 million in revenue by 2018.

McDonald told Huffington Post Australia bootstrapping (not taking any seed capital from outside sources and funding yourself) suits certain kinds of businesses more than others.

“Typically businesses that have pay-in-advance models, subscriptions, a scarce offer, subscription or transition from a service to a product are able to collect money from customers to fund their growth,” McDonald said.

“But businesses like Facebook or Google that work best when they already have a lot of people on the system would struggle to grow entirely on self-funding because their monetization comes later. So a bootstrapping decision is very much around the type of business you are in or want to start.”

You might have a great idea, but you put off doing anything about it until you have outside investment: according to Humphrey, that’s not a good reason not to start. First, you need to work out whether there’s a strong demand for what you’d like to do.

“I think a good starting point is simply talking to potential users to figure out what their pains and needs are. This is called ‘customer discovery’ and doesn’t get enough focus by most founders. Many people dive head first into a business idea with no knowledge of what their potential customers actually want – assumption is the root of all evil in the start-up world. You wouldn’t want to spend the little you have on building a concept that your customers don’t need and end up in debt,” Humphrey said.

Appster develops Android, iPhone & iPad Apps of all types. It all began in 2011 when McDonald and Humphrey had just $3,000 in their pockets. The first move? The men decided to move into an office they couldn’t afford.

“We moved into the Rialto Towers in Melbourne next to Google and IBM. This was a ‘burn the ships’ moment for us because we hadn’t generated any revenue yet and if we didn’t work really hard then we wouldn’t be here today!” McDonald said.

“The biggest challenges during our growth were really about attracting the right people. Once you have the right executive team you can focus on scaling revenue, people, improving strategy and execution.”

“It’s hard to convince people who have really been captains of industry to join you when you just have an idea and are a long way from being a big business! But today I’m glad we focused on hiring people with ‘been there, done that’ experience.”

“Also focus on providing a lot of value to each of your clients. You compete with other firms on innovation and by changing the game, rather than who has the most cash to scale. It’s also important to have a strong team around the founder who complements the skills the founder doesn’t have,” Humphrey said.

“The biggest key would be making sure you understand as a founder, you only know a small amount of what you’ll need to be successful in your venture. Without bringing on the right mentors, advisors, team members and co-founders that have a match with not just your skill requirements, but also the culture and vision you want to create, you’ll fail. Don’t be afraid to say ‘No’ to potential team members a lot more often than you say ‘Yes.”