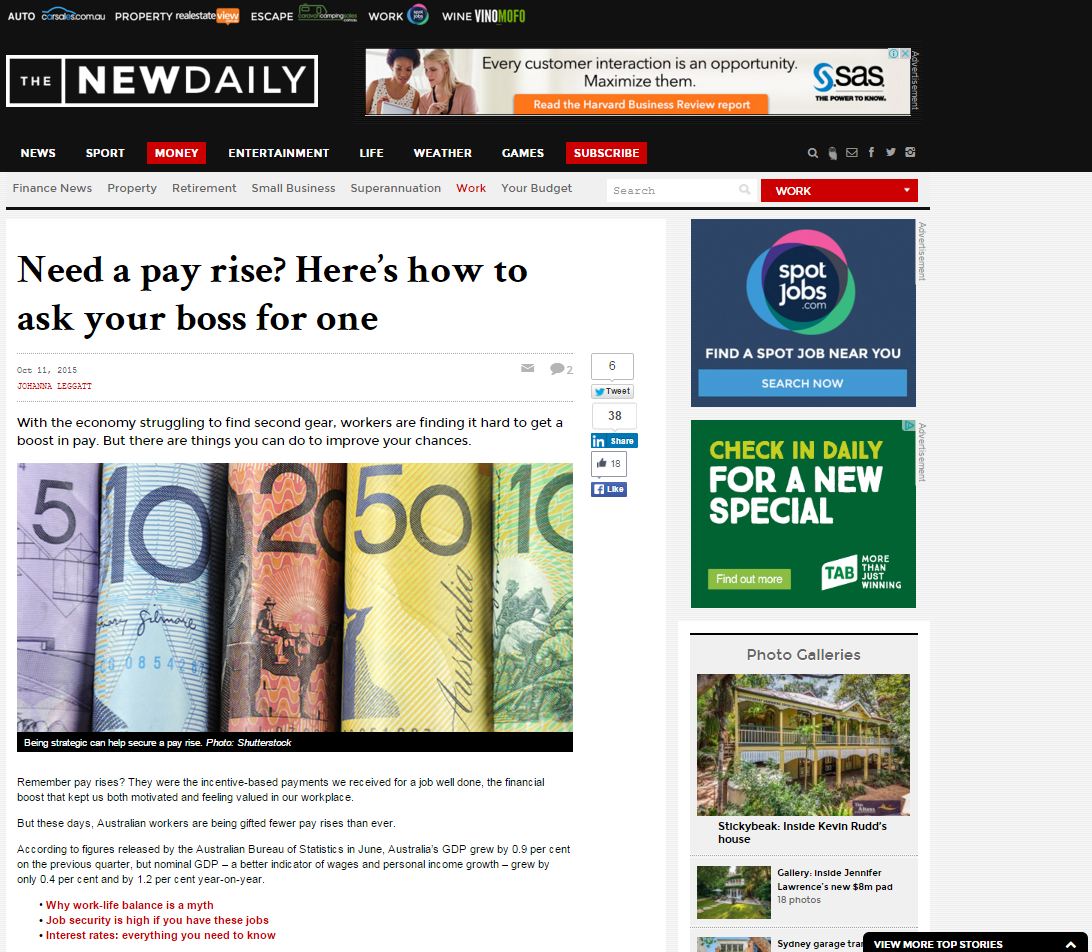 Remember pay rises? They were the incentive-based payments we received for a job well done, the financial boost that kept us both motivated and feeling valued in our workplace.

But these days, Australian workers are being gifted fewer pay rises than ever.

According to figures released by the Australian Bureau of Statistics in June, Australia’s GDP grew by 0.9 per cent on the previous quarter, but nominal GDP – a better indicator of wages and personal income growth – grew by only 0.4 per cent and by 1.2 per cent year-on-year.

None of which surprises co-founder of outsourcing site Airtasker, Tim Fung.

The company’s second Future Of Work study found more than 55 per cent of Australian workers expected a pay rise in the next 12 months, but fewer than half actually received one in the past year.

“Workers have quite high expectations of a pay rise, but that is unlikely to be matched by any kind of reality,” Mr Fung told The New Daily.

“There is this huge labour force that is under-utilised and what we found was there was a real desire for people to supplement their income through sharing platforms such as Airtasker, UberX and Airbnb.”

Aim for a raise

Taking on additional work in the sharing economy may suit some of us, but does that mean we should all but give up trying to secure a pay rise at our nine-to-five?

Not according to career strategist and author ofStand Out and Succeed, Christy Frank.

“Traditionally, annual pay rises are based on keeping up with the inflation rate and if workers want anything more than that then they will have to negotiate,” Ms Frank says.

“But the majority of people do not know how to negotiate or they are scared of negotiating, especially if it is a new job.

“But managers expect you to negotiate and here is the thing: no one is going to rescind an offer because you want to negotiate, but they may rescind one if you negotiate badly.”

So rather than storming into the boss’s office and essaying off your considerable charms and achievements, it is best to take a softly-softly approach.

“You need to do a bit of preparation in advance and that means months and months before your annual review,” Ms Frank says.

“Sit down with the boss and ask what you will need to do to be exceptional at your role so that way you set some expectations for your performance beforehand.

“You then need to work out what your market value is and compare your salary to industry standards for similar roles. Then you need to be honest and work out your individual worth and whether or not you are a cut above.”

Once you have put in the legwork, Ms Frank recommends flagging the possibility of a pay increase before the formal annual review.

“Rather than dropping a call for a pay rise in the middle of a performance review, it is best to have a coffee with the boss a few weeks beforehand and flag it then,” she notes.

“A boss would certainly appreciate that approach.”

Naturally, some organisations will be more open to rewarding staff than others.

CEO of Sydney-based Taurus Marketing, Sharon Williams, for example, says she makes a point of rewarding “initiative and performance”.

“This is one of the joys of being an employer,” Ms Williams says.

“I can drive equal pay between genders and I can reward young people for good work and see them get on their feet in life faster than they would anywhere else based on their commitment and good work.”

Ms Williams says her philosophy is based around the belief that it’s worth keeping motivated staff happy.

“Staff are more transient than ever,” she says.

“You only have them for a set period. So you want them settled and feeling a sense of self worth, like they are winning. All the stats say that happy staff lead to a happy, profitable business.”

There are times, of course, when a more pragmatic approach is called for. When business is tough and staff cannot be financially rewarded.

“Ultimately if you are going to try every day to make people happy you are on a losing streak,” she notes.

“Business is business, and the business needs to be served.”