Clean Up Australia is a Not-For-Profit that inspires and works with communities to clean up, fix and conserve our environment. It is the organisational body behind the nation’s largest community event, Clean Up Australia Day (CUAD), encouraging communities, schools and businesses to organise their own Clean Up event. The CUAD campaign aims to both educate the public to bring about long term positive behavioural change but primarily motivate participation in the event.

A mature brand in need of fresh ideas

Following the previous year’s landmark 20th anniversary celebration, the 21st CUAD was faced with reigniting fresh interest for both dedicated and new volunteers. For an event that was in danger of looking tired, it was essential to engage Australians across the nation to register to actively clean up as the commitment of volunteers to CUAD is core to the campaigns success.

Taurus was tasked with building awareness for the mature brand and for an event that was seeing a decrease in growth rate. This challenge involved reigniting passion and involvement as well as dealing with advertising creative poorly suited to developing PR angles and with only one media personality as spokesperson.

It also required generating and maintaining media attention over five months – while competing with the largest sequence of natural disasters in Australia’s history and the event’s first ever fatality.

Showcasing the community heroes to spearhead the campaign

Research was key to providing Taurus with news hooks throughout the five month build up. Taurus studied previous year’s campaigns to determine successes and failures and held strategy meetings and brainstorms with Board members and sponsors to involve them to the campaign’s advantage. Telemarketing was conducted with registered volunteers and site coordinators to find stories and the annual Rubbish Report conducted by CUAD, providing valuable qualitative facts and media angles.

As a result of the research findings, Taurus made a strategic decision to mobilise regional Australians and engage them by targeting local media to get to the grassroots with the support of research. Site coordinators and volunteers were utilised as ambassadors to profile throughout the campaign – they became the campaign’s media heroes.

The research was linked with the national media circuit releasing local statistics in every region visited and providing Ian Kiernan with a different hook in each area.

Around the clock communications to maintain the buzz

As many media angles as possible were utilised to raise awareness and maintain the buzz around the event, with the key aim to keep CUAD in the media spotlight. Taurus engaged with national, regional, local and community media and made sure everyone knew about CUAD 2011 with a direct call to action.

Tragically, in 2011, the first ever fatality occurred during a clean up. Taurus worked to ensure this did not affect participation and the media was given the facts.

This was not the only challenge – throughout the course of the campaign, some of the worst natural disasters in Australia’s history occurred. This included Cyclone Yasi hitting on the day of the Sydney launch at Sydney Aquarium.

Strong issues management expertise ensured Taurus were on message and sensitive to these disasters and that the Sydney launch was a success.

Among the many successes of the 2011 Clean Up campaign, perhaps most important was brand related – as a result of the PR support Taurus provided, CUAD maintained their reputation and awareness and interest of the 21-year-old event was reignited. This translated to 565,631 volunteers removing an estimated 16,449 tonnes of rubbish Australia-wide. 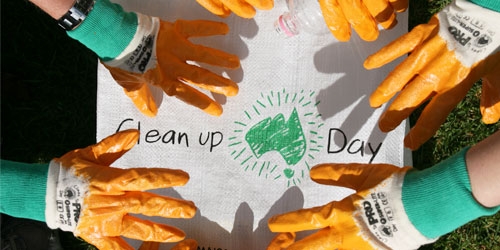 “The support of Taurus Marketing throughout the 2011 campaign was great. The vast media coverage they helped us achieve spread our message far and wide, encouraging all Australians to get involved.”

Ian Kiernan, AO, Chairman and founder of Clean Up

As a result of their efforts during the 2011 Clean Up Australia Day, Taurus were the proud recipients at the PRIA Golden Target NSW Awards for excellence in Public Relations. Taurus received the top honour in the Environment category for their effort and success, which they consider a testament to their dedication and passion for doing their bit to helping clean up Australia.

“The dedicated Taurus team was completely committed to getting us the greatest exposure possible; it was a huge achievement.”

Ian Kiernan, AO, Chairman and founder of Clean Up